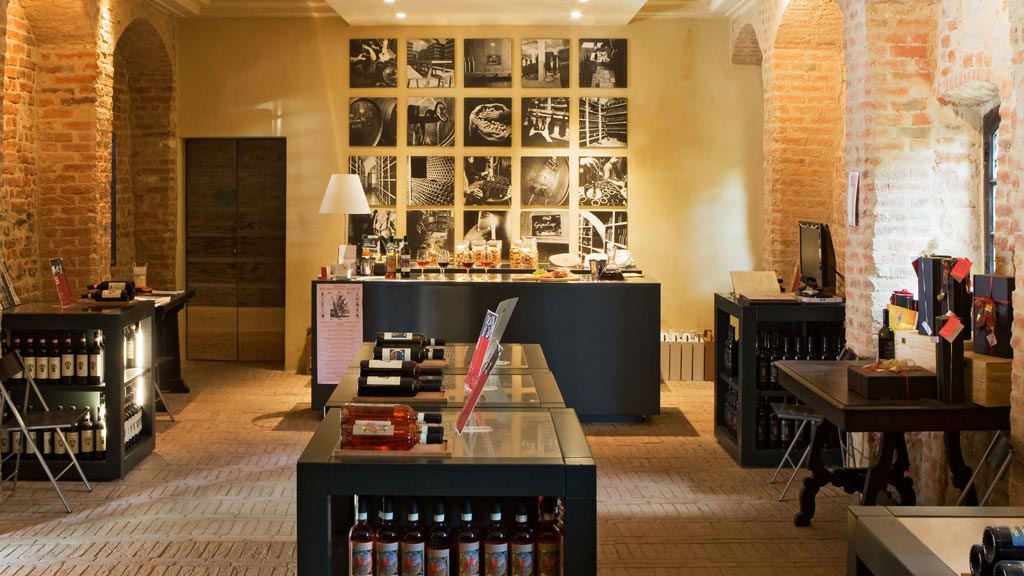 Jenny Saville is the subject of an exhibition project conceived and curated by Sergio Risaliti, director of the Museo Novecento, in collaboration with four other major museums in Florence: Museo di Palazzo Vecchio, Museo dell’Opera del Duomo, Museo degli Innocenti, and Museo di Casa Buonarroti.
The multipart exhibition places Saville’s paintings and drawings in dialogue with masterworks of the Italian Renaissance, including some of Michelangelo’s greatest masterpieces, offering a revealing encounter between the contemporary and the historical.
Correspondences include the monumentality of Saville’s paintings—a distinctive feature of her figurative language since her early career—as well as her research focused on the body and flesh of her naked subjects. 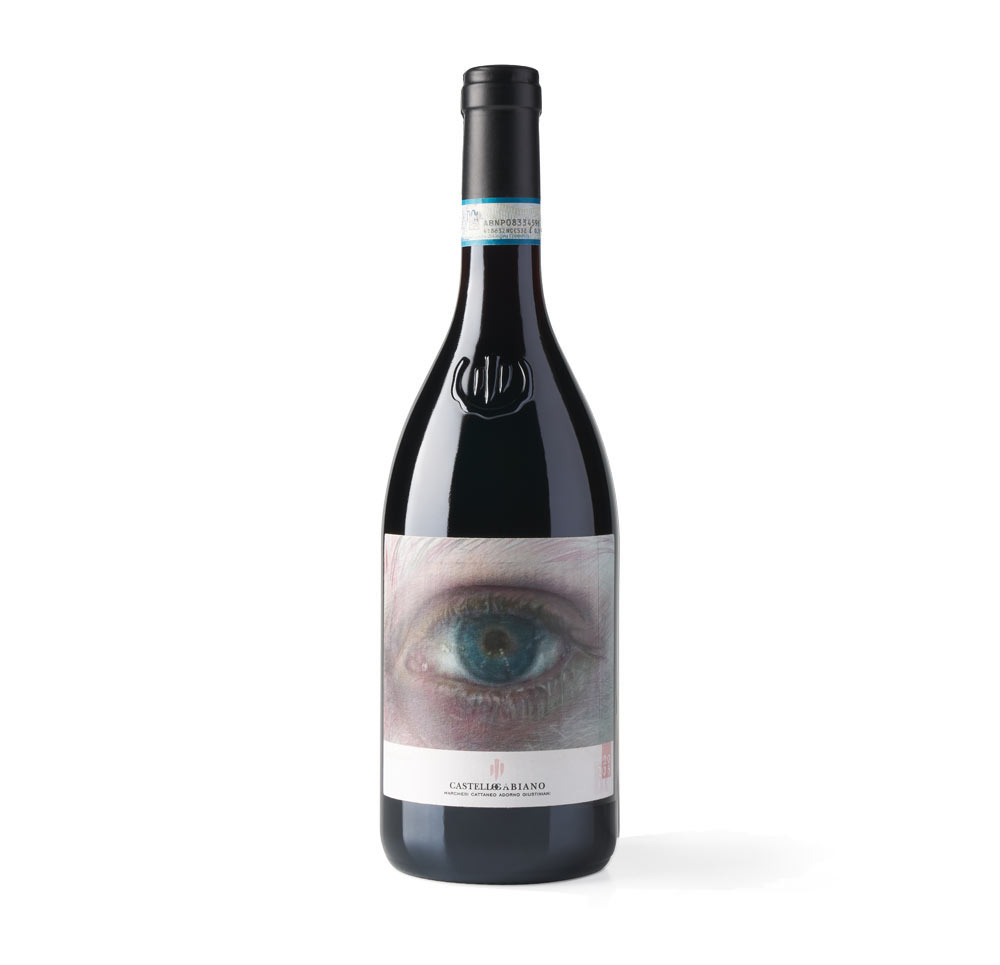 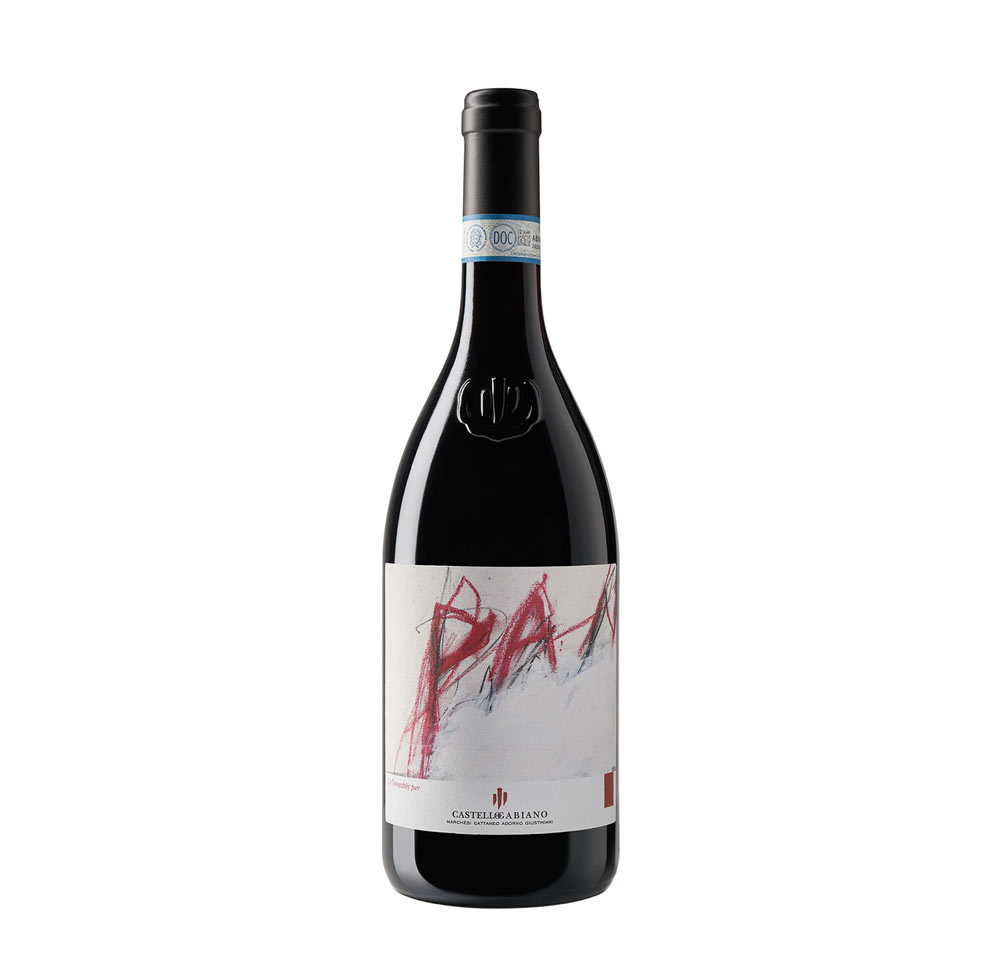 Cy Twombly (American, 1928–2011) was a seminal artist who came of age immediately following the Abstract Expressionist generation.
His iconic large-scale paintings consisted of looping marks scribbled and smeared on raw canvas or linen.
Twombly’s practice melded his interest in Roman and Greek mythological stories with the frenetic doodling of chalk on a blackboard. While at Black Mountain College , Twombly studied under Franz Kline and Robert Motherwell, who introduced him to the work of Paul Klee.
From 1960 onward, the artist spent most of his time between Rome and the medieval port city of Gaeta, where he steeped himself in thoughts of the Mediterranean Sea and ancient naval battles that had taken place there.
Today, the artist’s works can be found in the collections of many of the important museums worldwide.
The image chosen for the label for Castello di Gabiano a detail from an important panting titled "Pan", part I from 1980 was chosen.
In ancient Greek religion and mythology, Pan is the god of the wild, shepherds and flocks, nature of mountain wilds, rustic music and impromptus, and companion of the nymphs.

Ed Ruscha (American, 1937) was born in Nebraska and lives in Los Angeles.
Quickly recognized in the 1960s as an important representative of the thriving Pop Art movement and a successor of the Beat Generation for his collages and text-based pieces. As a painter, drawer, and filmmaker, Ruscha has been heavily influenced by the city of Los Angeles and by his initial interest in graphic arts, incorporating text and urban, as well as Western, landscapes into his work.
Ruscha comments on myths of American Romanticism, commercial culture, and urban life in humorous and ironic pieces.
He sometimes uses unusual media in his work, including fruit and vegetable juices, blood, gunpowder, and grass stains, in works such as his Stains series. Ruscha is best known for his witty and enigmatic use of text in his paintings, which he continues to incorporate into his works today.
Ruscha continues to influence contemporary artists worldwide, his formal experimentations and clever use of the American vernacular evolving in form and meaning as technology and internet platforms alter the essence of human communication.
For the design of the limited-edition label for Castello di Gabiano Ed Ruscha chose a detail of a painting representing a knot of wood. Ruscha’s investigations of the nature of language the shifts in scale push the limits of traditional painting genres. 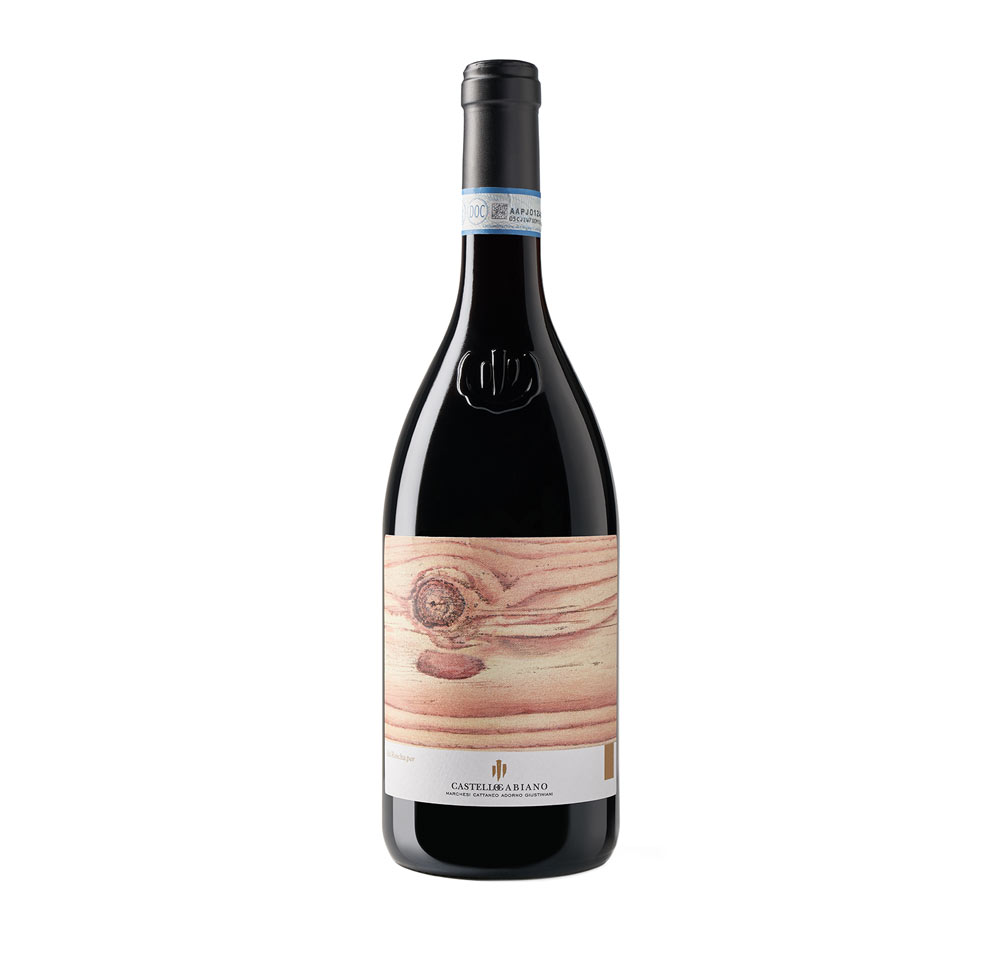 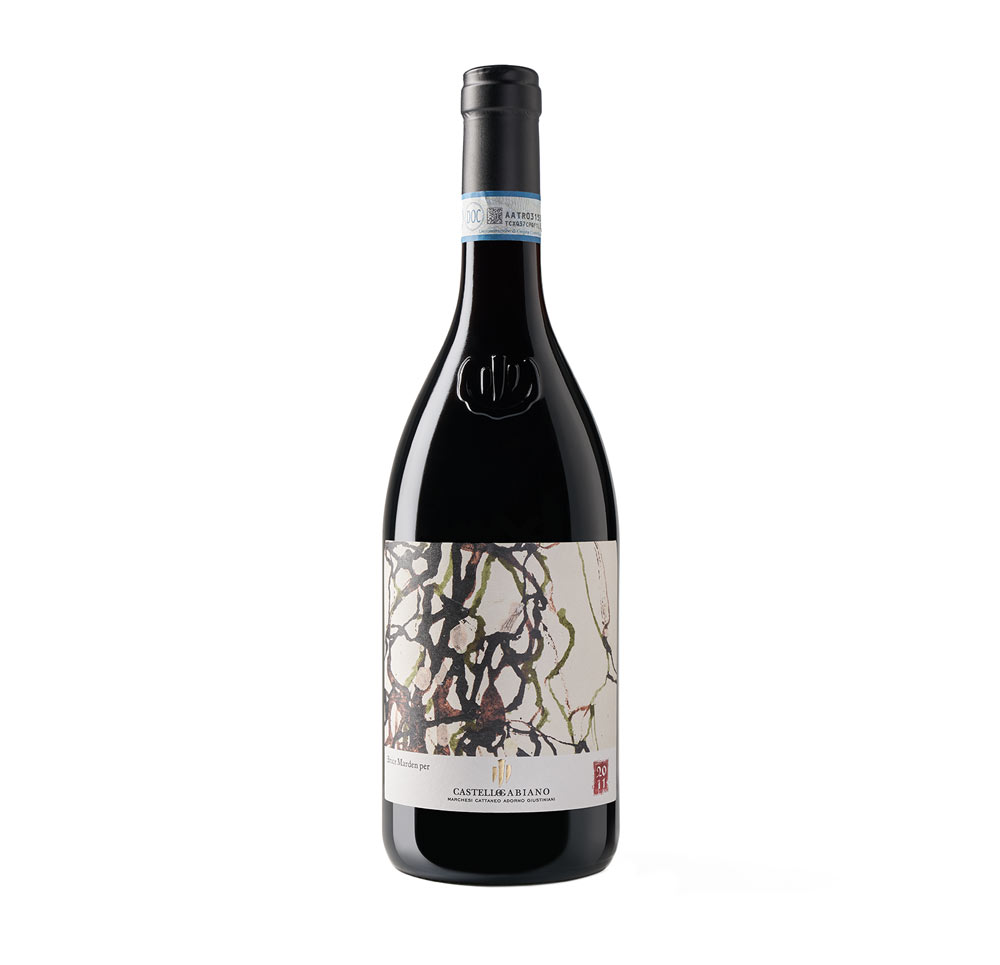 Brice Marden (American, born in 1938) is a painter known for his subtle explorations of color and gestural lines.
Marden’s canvases are the product of an ongoing investigation into the nature of abstraction and the medium of painting itself.
To heighten the effect of each color, plane, and brushstroke, Marden developed the unique process of adding beeswax and turpentine to oil paint and applying the mixture in many thin layers.
He has been exploring these winding lines ever since, experimenting with blank space, erasure, and references to the natural world.
He seeks to create a mystical experience through the creation of elusive abstract spaces.
For Castello di Gabiano Brice Marden especially drew the label in what seems a representation of calligraphy.
Drawn intuitively from the imagination the image seems to be partially inspired by Chinese calligraphy.

Adel Abdessemed (Algerian, born in 1971) is a conceptual artist who works in a range of media including drawing, video, photography, performance, and sculpture, and collaborates with creators from many fields, from poetry to dance and architecture.
He manipulates familiar materials and images to create provocative and often violent works .. Abdessemed seems to believe in a kind of totemic spirituality. 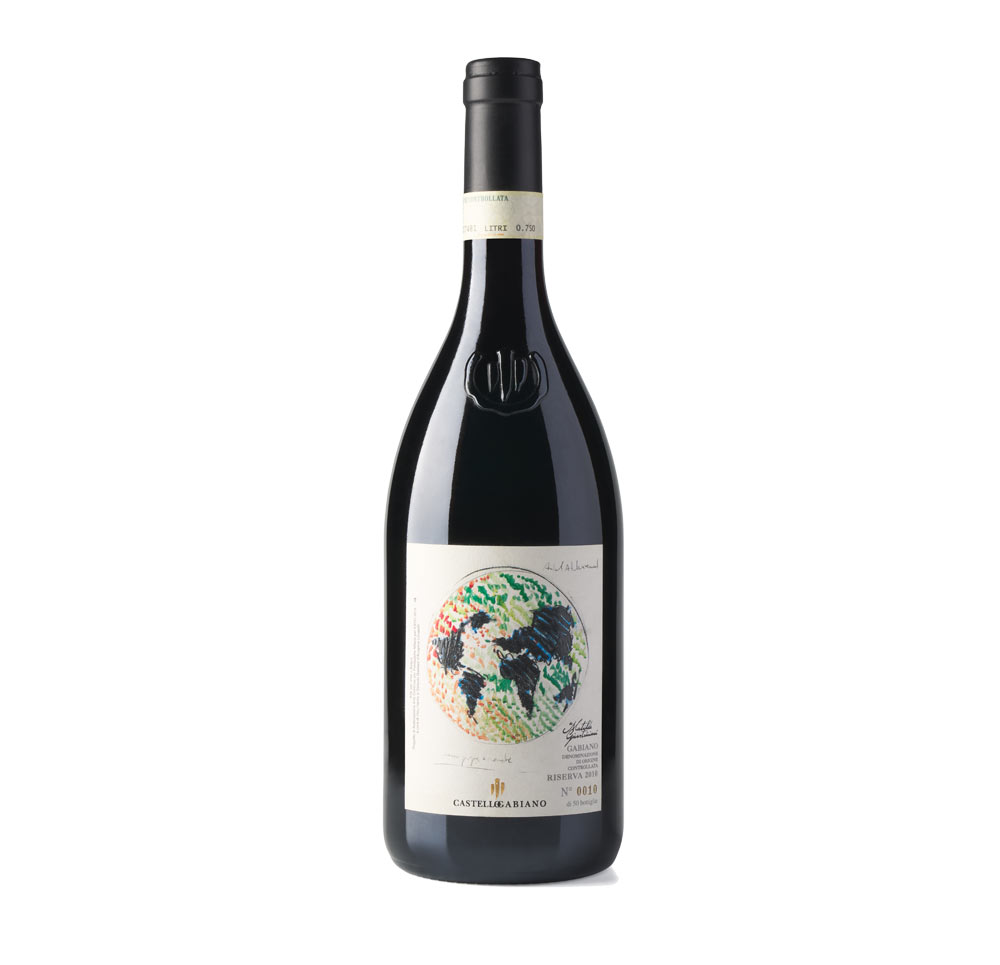